Photography with a focus on People

Jeroen Bouman’s slogan ‘I shoot people’ says it all, he focuses on people. His work is communicative and leads to action and interaction. Creative use of light and environment contribute to a clearly recognizable and personal style.

“People are all unique, each with a character of its own. And they all react differently to the camera, and to me. That turns every photography assignment where people are the subject into a small adventure. Technique is something you just master, but the social contact and responding to a certain situation keeps photography a personal discovery every single time.”

Jeroen Bouman has a background in reportage photography. Nowadays he works mostly as a portrait photographer, corporate photographer and advertising photographer. His work gets published in corporate and public magazines, brochures, annual reports, on websites, in add campaigns etcetera.

“I dislike compartmentalized thinking. A portrait can easily be categorized as corporate photography or even as commercial photography. And vice versa. So do have a look at the other categories of photography on this site!”

Jeroen Bouman shoots mostly for major clients. Large companies and organizations, multinationals and government agencies. Either directly or in cooperation with public relations or advertising agencies. In short, he likes to work with and for communication experts. Have a look at his clients.

“If your assignment doen not match my expertise fully, I’ll gladly put you in touch with colleagues who are better suited for your job. Take product photography, for example. I just happen to be at my best when people come into view.”

Are you a private person looking for a photographer in The Netherlands? In that case Jeroen Bouman would like to refer you to www.zoekeenfotograaf.nl. Unfortunately it’s in Dutch only.

Jeroen Bouman likes to shoot people in combination with background elements. That’s why he prefers to work on location. Distances or boundaries have never put limits to his work area.

“Shooting on location adds a dimension to my work. I’m not lying when I say that my eyes are always searching, looking for ‘the perfect background’ for a portrait. And people feel more at ease in their own environment, and thus act more naturally than in a photo studio. An added benefit for me personally is that I get to see a lot of companies from the inside. There’s so much variation there, that’s a real privilege to experience.”

From the baggage handling of Schiphol airport to a United Nations court room, and from nuclear power plants to the top floors of multinationals’ offices where the management resides. They are places that are off-limits to most people, but places where Jeroen Bouman always receives a warm welcome.

The seat of the Dutch government is in The Hague. Photographer Jeroen Bouman has been located here since 1999 and has worked for most of the government agencies. The Ministry of Justice, Finance and Social Affairs to name but a few.

And last but least, The Hague is also the homebase for major companies like KPN, Siemens, PostNL and Aegon. Jeroen Bouman has worked for all of them.

“With her international stature it’s a breeding ground for innovative high-tech startups. And with Schiphol Airport at it doorstep, it’s not surprising that many Dutch and foreign companies choose Amsterdam for their head office. As a consequence, nowadays I shoot more often in Amsterdam than in my home town The Hague.”

In Amsterdam, photographer Jeroen Bouman shoots for clients like ING, Martinair, Corbion and many other organizations.

The city that keeps Holland running: Rotterdam. Photographer Jeroen Bouman likes it for its no-nonsense mentality. The harbour, where real work is carried out, is always a photogenic subject.

Jeroen Bouman works for organizations in Rotterdam like BP, LyondellBasell and the Port of Rotterdam.

The university attracts a lot of young biotech companies like Genmab, and established corporations like Achmea, Rabobank and Stork all have their roots in Utrecht. Photographer Jeroen Bouman has worked for them all, The Hague – Utrecht is only a short distance.

Photography in Holland and abroad

There are lots of good photographers in Holland. But if you need not only quality but also consistency in your visual communications, you want to work with just one photographer. Even if it means that he has to travel all over the country. The Netherlands is just a small nation and distances are very manageable.

“For some clients I travel to the far corners of Holland regularly, from North to South and from West to East. And once in a while I have an assignment abroad. I’ve done shoots in London, Cologne, Paris, Brussels, Antwerp, Copenhagen and even in Malawi in Southern Africa.” 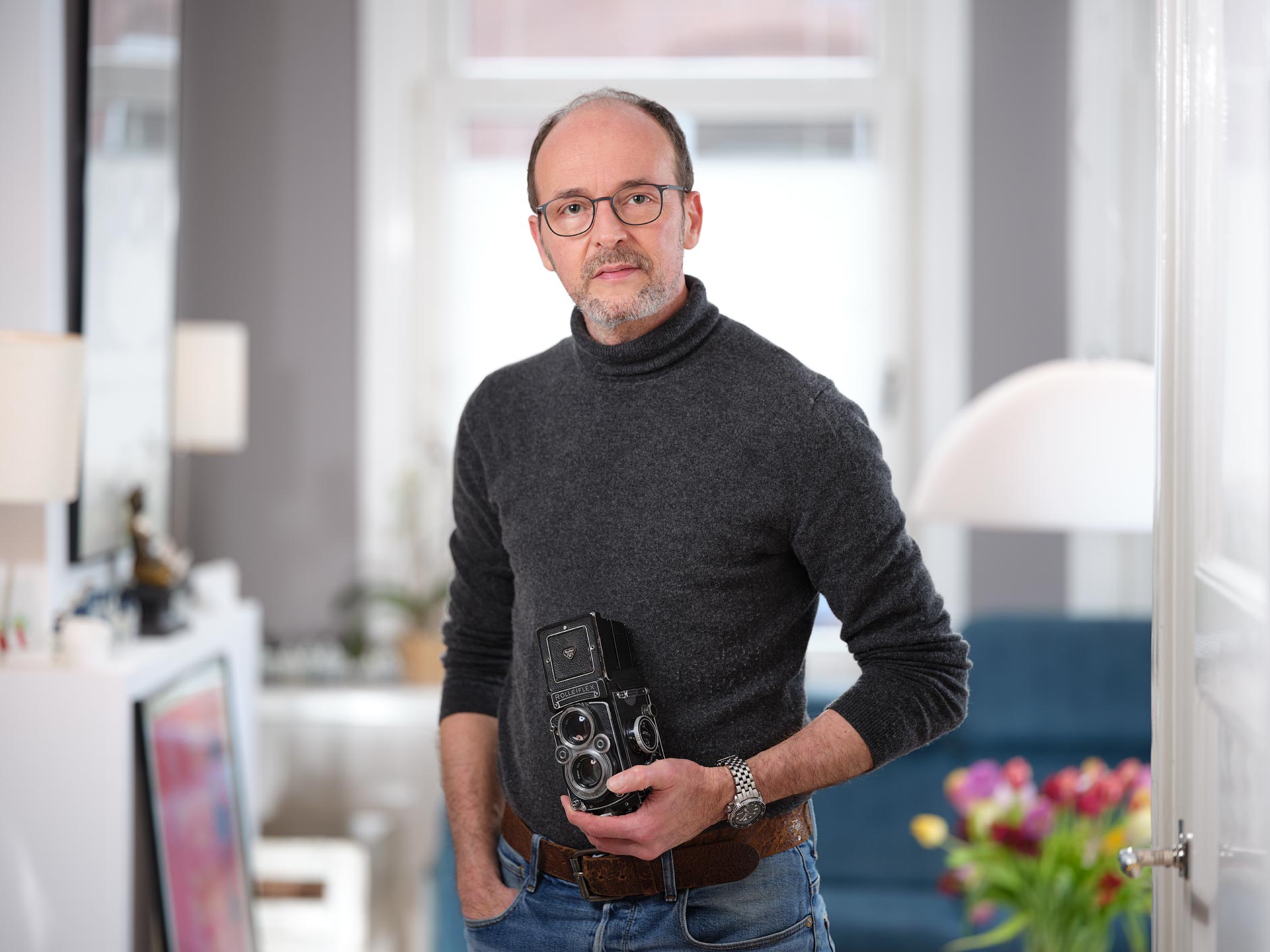 Photographer Jeroen Bouman with an old Rolleiflex, one of his favorite camera’s.

Jeroen Bouman (1968) studied photography at the St.-Lukas Academy in Brussels and the Rietveld Academy in Amsterdam. He started his career in 1992 as a freelance photojournalist, connected to photo agency Sipa Press in Paris. Three years later, Jeroen made a career switch and became a full time staff photographer at Capital Photos and later Benelux Press. He’s working as fully independant photographer again since 1999.

“My fascination for photography started when I was twelve years old. My grandfather was a passionate photographer in his spare time. When I received my first camera -a tiny Rollei 35B- I was sold. I just couldn’t put that camera down.”

“Although I now make a living from photography, I still regard it as my hobby and I have every intent to keep it that way, too. If photography ever were to become a nine-to-five job, I would quit instantly. To prevent that from happening I regularly work on personal projects. It’s fun and gives me a chance to further develop my skills as a photographer. A little experimenting, without pressure or expectations from anyone.”

“In my spare time I like to do extended hikes above the Arctic Circle, through remote and inaccessible areas where the mountains are lined with glaciers. Always solo, and usually without a camera. It clears my mind and gives me renewed inspiration.”

To find out what I can do for your organisation, please feel free to contact me.